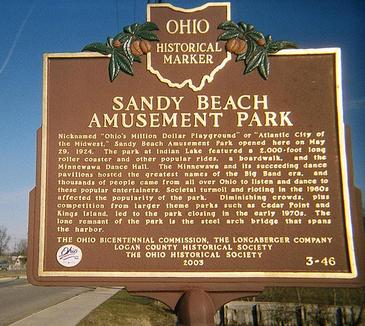 DISCLAIMER: Indian Lake Area Historical Society (“ILAHS”) reserves the right to manage any and all funds received, whether solicited or unsolicited, to use as necessary for the Sandy Beach Bridge Renovation Project. By donating, you agree that all funds received for the Sandy Beach Bridge Renovation Project may be used for capital improvements, maintenance expenses, or other needs identified by ILAHS on ILAHS-owned, or ILAHS non-owned (right-of-use) properties related to this Project. 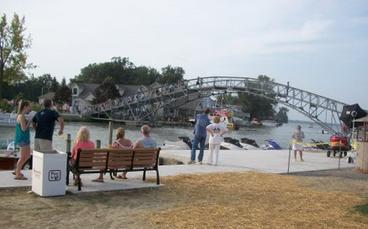 The Indian Lake harbor bridge has been an icon of both Indian Lake and Logan County since its construction in the 1920's. The bridge served as the pedestrian connection between the two sides of the amusement park which, until falling into disrepair during the 60's, became known as "Ohio's Million Dollar Playground." Thousands of friends were made, loves confessed, and millions of lives were touched from atop the span of this bridge looking out over Russells Point harbor.

Since purchasing the amusement park property in 1981, Mr. W.M. (Bill) Reed had a vision of making the bridge come to life again as the center of activity in a bustling Russells Point harbor. Mr. Reed rebuilt the concrete abutments and thoroughly painted the structure to prevent any further decay. However, he was prevented from re-decking the structure by the cost of bringing the bridge to current building codes and the cost of insurance for a private individual to open the bridge to the public..

Knowing the wishes of their father Bill, and mother, Marjorie (both now deceased), the Reed family chose to work with the Indian Lake Area Historical Society ("ILAHS") to complete this project. A Sandy Beach Bridge committee was formed within ILAHS, and includes interested community members to ensure proper guidance and focus on the planning, funding, and execution of the project. With the benefit of being a public entity, the dream of bringing the bridge to life once again for the entire Indian Lake community can become a reality for older generations, as well as for our newest and future generations.

We would like to thank the public for purchasing pavers. All pavers have been sold and no more space is available. 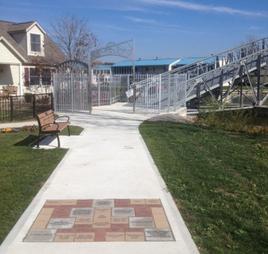 Visit the park to view the plaques and learn about Indian Lake's rich history.

To see a larger view of the slide show, right click on an image and select the option, "Open image in new tab."